Living Outside of Your Comfort Zone 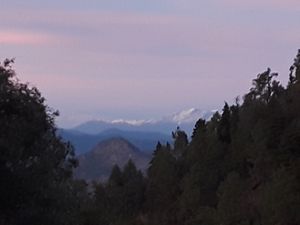 Living outside of your comfort zone requires deliberate effort throughout life. When you first step outside of your comfort zone it is frightening and uncomfortable, but if you stay there for a while, it eventually becomes comfortable. Maybe you start to feel comfortable or maybe you acclimate into the discomfort. Either way your circle of comfort has expanded and now you are called upon to take another step out and then another step out. Keep taking these steps and one day you will look back and barely be able to recognize the person that you once were, long ago, living in that teeny tiny comfort zone of the past. That is what happened to me when I found myself around a campfire, with a group of men in the middle of the night, in a remote guest house in the foothills of the Himalayas. I could barely recognize my former self. I felt happy and at ease and I wondered in that moment; "How did I get here?" It was not by just the journey of planes, trains and buses, but the journey of continually stepping outside of my comfort zone. In that moment I saw so clearly how if I would've clung to fear, I would've missed out on what will always be a truly magical memory, that night in Kukuchhina, India.

I spent most of my life up until this point actively avoiding the company of men. I had good reasons. Very good reasons. We all have reasons for why we stay in our comfort zone. It feels safe. We think if we stay in this little circle then we won't have to suffer so much. As a child I was raised under the guiding principal of "worst case scenario" and taught to  always be cautious and ready for the worst. My mother not only cautioned us, but instructed us, on how to avoid kidnapping, which was presented as an inevitable event at some point in life. At least that's how it seemed to me. Then as I grew older and became a teenager, the kidnapping scenario became the "getting attacked" scenario. And this too, it seemed, would be something I would definitely have to face and therefore must be prepared. And despite all the cautions and all the preparedness, bad things still happened. In other words, living in fear did not keep me safe. And now, at this age, I really feel that no one will get through this world unscathed. This is life: There is joy and pain, happiness and sorrow. Living in my comfort zone was a very small space. In fact my world got smaller and smaller. I would buy my clothes at the same store, and eat at the same restaurant. When I traveled, I went to the same place year after year, because I knew it. I liked it. I felt safe there. I worked a crappy job that was close to home because I was a nervous driver. And a dozen more examples I could give of how my life was being shaped and confined by fears. But the Universe wasn't going to let me continue living small.

One day the rug got pulled from under me and in an instant my whole world shook with the pain of betrayal and loss. All the precautions, and all the safe choices didn't protect me from pain in life. Everything I thought I was building got torn down in an instant. It was the same lesson I was shown previously, but it was even bigger now, telling me once again that living in fear did not guarantee safety, but instead it guarantees a small life, a half life. And in that moment, which was almost 10 years ago, I finally decided to stop allowing fear to hold me back. It didn't happen all at once, but it happened little by little, just like I mentioned above with one step and then another, and then another. I won't even discuss "releasing fear" because that is so misleading. I didn't release anything. I faced my fears. I leapt head first into the unknown again and again. Yes, I was terrified, but I did it anyway. And each time I did it, I got stronger. Did I get less fearful? Maybe, but remember, courage doesn't mean you don't have fear. Courage means you don't let fear hold you back from being who you are meant to be. So I kept taking the steps. I left the crappy job and I got a better one where I was appreciated. I began training to be a yoga teacher. I began doing things that scared me. I left the relationship that was stained by betrayal and I began to live alone in a quiet apartment. I had never lived alone before. I always imagined it would be very scary to live alone. I was totally wrong. I loved it. It was quiet. It was freedom. It made me wonder; how many other fears were lies? (Spoiler Alert: Pretty much ALL of my fears were lies, and yours probably are too!)

I bought a yoga studio - that was scary and awesome. I started an online Academy where I began recording videos of myself. Some of those videos were of me teaching yoga classes. Want to face your body image fears? Try putting yourself out there on the internet with videos of  yourself doing yoga! But I kept doing it, again and again, taking the small steps, that often felt like enormous steps. And during all of this, I met someone. Not just someone.... I met an incredible man with whom I felt a deep connection. So powerful was the energy between us that I knew I could willingly face every fear to get closer to him, and I also knew intuitively that if I didn't do that, I would be missing something amazing. So again, I took more steps out of my comfort zone one after the other. He helped me with every step. He saw my fear, and he understood the reasons, and he loved me enough to desire my fullness. He knew that fear would keep me from becoming all I was meant to be. He would never let me use him to hide from fear but always encouraged me to find my own power. And I did. I found my power and my courage and I did many things I never thought I would do. And one of those things was to fly to the other side of the world to finally meet this incredible man who had walked beside me (figuratively) for more than three years.

So that's how it happened that I found myself one night, in the foothills of the Himalayas, as the only woman in a group of men around a campfire under a beautiful starry sky, feeling no fear but only contentment as we sat there in the cold, sharing glimpses of our lives and learning about each other's culture while an occasional shooting star streaked overhead. It was well into the night when we finally left the warmth of the glowing embers and thanked those wonderful strangers for letting us share their campfire and conversation. He and I headed back to our room. It was so cold, on that December night under the snow covered mountain peaks. I might've quickly slipped inside our room to find some warmth, but he stopped me. He gestured for me to stand beside him on the terrace. He reached for my hand and held it while we stood there in the cold, under the stars, gazing over the hills and mountains. It was divine stillness, blissful peace and contentment. There was never a more perfect moment of love and beauty. 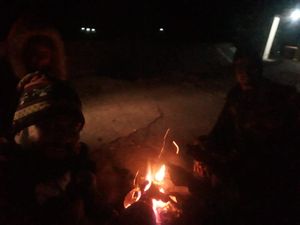 What would my life be like now if I never stepped out of my comfort zone? If I never faced my fears? Or if I never understood my own strength? I would've missed out on SO many amazing moments and opportunities for growth. I wouldn't be the woman I am today if I had kept on living a small life within the confines of my comfort zone.

I still have many fears, but nothing terrifies me more now than the thought of letting fear hold me back.

If you would like to learn more about stepping out of your comfort zone and creating the life you've imagined, consider joining me in the Beautiful Souls Academy where we study short teachings weekly, from various traditions, that help us live joyfully and courageously in the wondrous Now.