Nothing is Ever Lost

I stepped out onto our little balcony three floors above the mostly dirt road below. Although we live outside of the city’s center, there are still only buildings to be seen from here to the horizon in any direction you look.  The structures are mostly residential in this seemingly endless urban sprawl with occasional trees growing along the roadsides where cows, dogs, and chickens are as much a part of the local traffic as motorbikes and rickshaws. I had gone out to the balcony to take a closer look at the mogra flowers that opened for the first time today. The layers of white petals unfurled to create the most perfectly shaped round blossom. There, in the heat of the mid-day, I leaned over the plant to enjoy its alluring scent, which up to this moment I had only read about and never experienced first hand. With my nose against the silken bloom, I inhaled deeply and a flood of memories poured into my mind as the scent of the mogra seemed identical to the fragrance of honeysuckle. Oh, sweet honeysuckle, that woody vine bedecked in yellow and white tubular flowers! Thickly it covered the backyard fence of my childhood home. Many hours I would spend there beside it, watching the butterflies coming for a taste of nectar. Even I would partake of this treat, for if you gently pulled on the stem at the bottom of the honeysuckle flower you could pull out the style and with it comes one sweet drop of nectar.  It was here, with dedicated patience thought to be uncommon in young children, that I would watch the butterflies and wait. For I knew that oftentimes as a butterfly was enjoying the flowers its wings would slowly open and close. I also had come to know that when a butterfly closed its wings, if I moved very slowly, I could then gently catch and hold the butterfly between my thumb and index finger. Catching a butterfly was no less thrilling than if I were holding an actual pixie in my hands. I could look at it closely and see every detail of its wings and many legs. Oh the delight! (When I got older I was very saddened to learn that the powder that was left behind on my fingers after holding a butterfly was actually their scales, and it is injurious to the insect, just as if we were to have our own skin rubbed off. I therefore promptly abandoned this pastime but continued to observe, and never again catch or touch, butterflies.) It was also beside this hedge-like honeysuckle vine that I refined my bumblebee-petting skills. (Thankfully, touching a bumblebee does not injure the creature as it does a butterfly.) Those fuzzy buzzy bumblebee backs were too tempting to touch. The busy bee has no time for me and in its quest for pollen my gentle pet is no more disturbing to it than a summer breeze. How that buzzing bumble bee would vibrate under my finger lightly upon its back! This hobby I had no reason to abandon and still find joy in it today and a jolly laugh as well when the bee, busy but aware of me, lifts one of its legs in my direction and with a little wave, just as one might mindlessly wave a gnat away from their eyes, it gives a clear enough message that it is only tolerating my touch because it is too busy to communicate further with me.  But it wasn’t just the memory of butterflies and bees that came flooding into my mind. It was the recognition that my love for nature and for gardening grew right there just as vigorously as the honeysuckle vine conquered, and covered, that metal fence. I was in awe and wonder of these magical creatures, of the allure of a flower’s fragrance, and of the mysteries of trees. One day I left that childhood home, never to stand by the honeysuckle hedge again.

I settled into my own home and began to make my own garden. What started as just a small plot of grass and little else became a haven of flowers and trees for butterflies, birds, and bees. So dedicated was I to my love for flowers that I researched and planted flowers with the deliberate intent to always have something blooming in my garden every day of the year. Even in the bleakest Pennsylvania winters, there was still at least one flower blooming. Sometimes that Christmas rose was buried under a foot of snow, but I still knew it was blooming there. And soon enough the white heads of the snowdrops, bowing in reverence to the imminent death of winter, would appear against the house, followed closely by the crocus and then the daffodils. And on it went, season after season, year after year, my garden grew and grew. The apple trees I started from seeds, the goldfish pond I dug by hand and the dozens of butterfly bushes and milkweed (a tribute to those winged wonders as well as an apology to them for the ignorance of my youth) were all part of this magical place that I co-created with nature herself, that divine queen, our holy mother. The medicinal herbs, the vegetables, and the fruits were the wealth of my days and the joy of my spirit. But, one day, I had to leave this place behind too. Goodbye weeping cherry tree that scattered its pink petals onto the spring breeze like a magical snowfall. Goodbye wild raspberry bushes with fruit that shone like rubies in the summer sun. Goodbye hummingbirds and goldfinches and all winged gems so beloved and cherished. It was time for me to go.  The next adventure was already unfolding.

I bought a yoga studio and it became like my garden. All of my time and effort went into growing this community and helping students to bloom and thrive. It was more than a full time job to keep this small studio afloat so that it could remain a haven of health and peace for all who entered. Although my free time was nearly non-existent now, outside of my small apartment I still had several large flower pots that were mostly neglected but managed to burst forth with tall sunflowers anyway along with savory oregano, pungent yarrow, ever determined morning glories and even a few goldenrod stalks. But the days of passing the hours watching butterflies floating by, or petting bumblebees was over. If I had time to mourn, I might have shed a few tears over what I lost, but I was too busy focusing on what I gained. Getting to know the students at the yoga studio was just as interesting as learning about new flowers or the habits of birds. Everyone had a special beauty, a unique spirit, and it was my delight to be amongst these kind-hearted folks. For two years I was the caretaker of this amazing community and, just like a garden, I received much more in return for all the hours of dedicated work I put into that studio. But, one day, I had to leave this place behind too. The pandemic swept through our town, and through the whole world.  Just like a long drought shrivels the garden, the long lock-down was the end of our physical studio. Soon I had to leave my small apartment too. And what became of those planters in front of my apartment? A kind lady, who was a former singing student of mine and fellow nature lover, was happy to receive them all. And it is worth mentioning, in another beautiful circle of life, that the morning glories growing in those pots came from seeds I had received from the woman’s parents many years prior.

And now here I am, in a crowded city in India, turning our small balcony into a beautiful garden haven floating three floors above the street. The mango tree grown from the pit of a sweet mango I enjoyed weeks ago is already eight inches high with leaves that are almost as long. There are many flowers in my hanging pots, whose names I have yet to learn. I am also growing basil, tomatoes, watermelon, jasmine, a palm, marigolds, spinach, mint and more. On the much smaller balcony off of the kitchen I have two composting buckets, a curry plant and a few more tomato plants. On the kitchen windowsill sits a small glass bottle containing cuttings of jade and mint, both of which have already begun to put out roots. In just a few short months since arriving here I have transformed our balcony into a mini garden haven complete with a string of soft white lights for peaceful nighttime enjoyment.

What I realized in that moment of breathing in the sweet fragrance of mogra, that awoke in me all the memories of honeysuckle and the gardens that I loved and lost, was the truth that nothing is ever lost. Read that again. Nothing is ever lost. Love never dies, it just changes form, again and again. I still have “my garden”. The plants are different, and the climate is VERY different, but here I am, still smelling the flowers, watching for butterflies, and growing whatever I can. Nothing is ever lost. Just like those morning glory seeds, things have a way of circling back. Nothing is ever lost. Everything changes form, again and again. From honeysuckle to mogra, from USA to India, from beginnings to endings and back to new beginnings. Whichever part of the cycle you find yourself in now, take heart: Gains and losses, life and death, beginnings and endings are not opposites to each other but one and the same. Just as the wave rolls to the shore and pulls back out again, and just as an exhale will surely follow your next inhale, these things are merely different points on the same circle. This is the wisdom that the mogra flower shared with me. 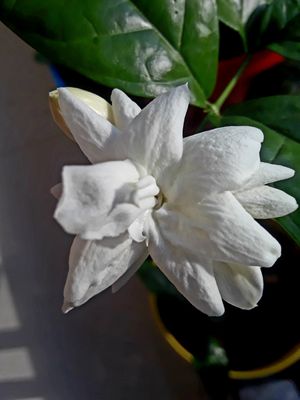